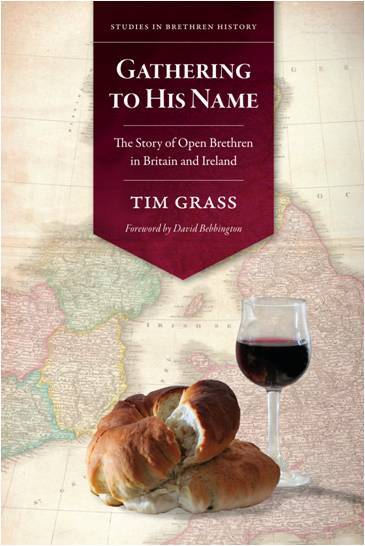 The definitive history of the Brethren movement is Tim Grass, Gathering to His Name: The Story of the Open Brethren in Britain and Ireland (Milton Keynes: Paternoster, 2006; rpt. BAHN publishing 2013). This book traces the story of the Brethren movement in Britain and Ireland from its beginnings in the 1820s to the present day, with a primary focus on those gatherings known as Open Brethren. The overall aim is to provide a readable narrative of the movement's development and distinctive ethos. The work explores where, when, how, and why assemblies grew and declined, and charts the development of a range of associated institutions. Although the main focus of the study is the Open Brethren, there is also material on the other streams. For a review of this book by the historian Dr Harold Rowdon, click here.To order the book, click here. If you live outside the UK, click here. Witness in Many Lands: Leadership and Outreach Among the Brethren is the second volume in Studies in Brethren History. Most of the essays in it were presented at a conference held at the Bibelschule at Wiedenest in Germany. It can be ordered by clicking here. The contents are:

Stephan Holthaus, Georg Müller (1805–98): His Life and Work; Michael Schneider, ‘The extravagant side of Brethrenism’: The Life of Percy Francis Hall (1801–84); Berthold Schwartz, J.N. Darby as Theologian, with Special Reference to his Understanding of the Relation of Law and Grace; Stephan Holthaus, Friedrich Wilhelm Baedeker (1823–1906): His Life; Ian Randall, ‘Ye men of Plymouth’: C.H. Spurgeon and the Brethren; Crawford Gribben, ‘The worst sect that a Christian man can meet’: Opposition to the Plymouth Brethren in Ireland and Scotland, 1859–1900; David J. Macleod, Walter Scott: A Link in Dispensationalism between Darby and Scofield; Neil Dickson, William Edwy Vine (1873–1949) and Brethren Biblical Interpretation: A Case; Neil Summerton, The Significance and Influence of George Henry Lang (1874–1958); Neil Dickson, Littoral Truth: The Mind of Robert Rendall (1898–1967); Horst Afflerbach, What can we learn from Erich Sauer (1898–1959)?; Daniel Herm, Wiedenest: A Century of Influence in Europe, 1905–2005; Stephan Holthaus, A Hundred and Fifty Years of the Brethren Movement in Germany; Tim Grass, The Development of a Support Base for Overseas Mission in British Brethren; Johannes Reimer, From Berlin to Turkestan: Early Brethren Mission among Muslims of Central Asia; Andreas Liese, The Brethren Movement in Germany during the National Socialist Era; Kovina Mutenda, An Evaluation of the Impact of Christian Brethren Theology on Zambian Christian Brethren Churches.

For a review of this book by Dr Thomas Marinello, click here.

OTHER KEY TEXTS ON THE MOVEMENT ARE (listed alphabetically by author):

Robert Baylis, My People: the history of those Christians sometimes called Plymouth Brethren (Wheaton, Illinois: Harold Shaw Publishers, 1997), is a history of the Brethren in North America until the late twentieth century. Uniquely documented, with over 100 illustrations and photographs, this history of the Brethren in North America will take its place as the definitive survey by a veteran insider. Robert H. Baylis has worked on this history for years: "The Brethren are my people. Through a lifetime of association with the assemblies, I know them well, both their strengths and their weaknesses. My purpose in this history is to tell their story in a positive way." For the review of this book by the American historian Dr Ross McL

Roy Coad, A History of the Brethren Movement: Its origins, Its Worldwide Development and Its Significance for the Present Day, 2nd edn 1976 (Vancouver: Regent College Publishing, 2001) is a pioneering study from an Open Brethren perspective. Coad's work traces the history of the Brethren Movement, which began more than 170 years ago and has since spread throughout the world. The author considers some of the outstanding characters produced by the movement, as well as its significance in relation to the whole Christian church. "A notable contribution to historical scholarship" (Journal of Ecclesiastical History).

Jonathan D. Burnham, A Story of Conflict: the controversial relationship between

Benjamin Wills Newton and John Nelson Darby (Carlisle: Paternoster Press, 2004), is a study of the disputes between two founding figures in the movement which led to the division between the Open and Exclusive Brethren. Darby's eschatological views had far-reaching effects on evangelicalism and Burnham explores the development of his prophetic system and his biblical literalism which led to his distinctive views on pretribulational, premillennial dispensationalism. While having much in common with Darby, Newton departed from him on key points. In many ways, Newton and Darby were products of their times, and this study of their relationship provides insight not only into the dynamics of early Brethrenism, but also into the progress of nineteenth-century English and Irish evangelicalism. For a review of this book by the historian Dr Harold Rowdon click here.

Robert Bernard Dann, Father of Faith Missions: the life and times of Anthony Norris Groves (1795-1853) (Milton Keynes: Authentic Paternoster, 2004) is a biography of the first Brethren missionary who is also a seminal figure in Open Brethrenism. Modest and unobtrusive, Anthony Norris Groves did not consider himself a gifted evangelist. His name is not usually mentioned alongside William Carey and Hudson Taylor, but Groves had a pioneering influence that went beyond his personal reach. He and his family followed God's call to Baghdad and India, leaving their comfortable English lives behind. Though he doubted his success as a missionary, Groves' character and ideas shaped the people who followed him as he followed Christ. Exhaustively researched, Father of Faith Missions is not merely about the life of one missionary but also a record of Groves' influence on missionary initiatives and the Brethren movement. For a review of this book by the historian Dr Timothy Stunt click here.

Paternoster, 2003) is a history of the Brethren in Scotland which provides an analysis of the movement that is frequently relevant outside that country. The Brethren were remarkably pervasive throughout Scottish society. This study of the Open Brethren in Scotland places them in their social context and examines their growth, development and relationship to society. For a review of this book by the historian Dr Timothy Stunt click here

Neil T. R. Dickson and Tim Grass (eds), The Growth of the Brethren Movement: National and International Experiences (Milton Keynes: Paternoster, 2006) includes a number of papers analysing the experience of the movement in different cultural contexts. The essays in this book have been contributed in honour of Dr Harold H. Rowdon, a teacher of several generations of students at the London Bible College and a historian of the Brethren movement. The book includes reflections on the historiography of the Brethren, but it is their character and growth which form the principal focus. 'Well researched, well interpreted and well written', Ian Rennie.

W. Blair Neatby, A History of the Plymouth Brethren, 1901, (Stoke-on-Trent: Tentmaker Publications, 2001). For the first half of the twentieth century this was the classic account of Brethren history. Although it has now been superseded by the academic histories listed on this page, it still contains many valuable insights and is a splendid example of literary history writing in its own right. Tim Grass has described the book as follows: "W. Blair Neatby’s A History of the Plymouth Brethren was the first major history of the Brethren movement. It appears that Neatby was associated with an Open Brethren assembly at Kendal at the time when he wrote, although the book gives no hint of this. Although the work was not apologetic in the sense of defending the movement against its detractors, it was motivated by a concern to remedy the prevalence of inaccurate impressions concerning the movement’s beliefs and practices. It majored on Darbyism, that being the most vigorous form of Brethrenism in his day in terms of literary output and, in his view, normative Brethrenism: Neatby considered that Open Brethrenism ‘may be best regarded as a kind of incomplete Darbyism’." For a review of this reprint, click here.

Harold H. Rowdon, The Origins of the Brethren 1825-1850 (London: Pickering & Inglis, 1967) is the classic account of the movement's beginnings until the schisms between the Exclusive Brethren and the Open Brethren. This study is an attempt to unravel the origins of the movement, and to pinpoint the divergences which lay behind its division into two distinct branches written by the doyen of all Brethren historians. The book sketches in some detail the relevant aspects of the early nineteenth-century background, the emergence of the Brethren in Dublin and Plymouth, the roles played in the formation of the movement by Anglicans and Nonconformists, and the final divergences which led to the division of the movement into the two wings which survive to this day.

2005) examines the development of all sections of Brethren against the shifting cultural context. Shuff holds that the influence of the Brethren movement on wider evangelical life in England in the twentieth century is often underrated. This book records and accounts for the fact that Brethren reached the peak of their strength at the time when evangelicalism was at it lowest ebb, immediately before World War II. However, the movement then moved into persistent decline as evangelicalism regained ground in the post war period. Accompanying this downward trend has been a sharp accentuation of the contrast between Brethren congregations who engage constructively with the non-Brethren scene and, at the other end of the spectrum, the isolationist group commonly referred to as Exclusive Brethren.

Timothy C. F. Stunt, From Awakening to Secession: Radical Evangelicals in Switzerland and Britain 1815-35 (Edinburgh: T&T Clark, 2000) is the fruit of wide-ranging research setting the origins of the movement in its European context. This book is a major study of the impact of the Swiss Reveil (Awakening) on British evangelicals in the 1820s. It provides an important synthesis of a variety of tendencies and movements which have usually been treated and understood as separate. By resisting the temptation to read back into the 1820s the partisan labels of later decades, Timothy Stunt rediscovers the common ground which was shared by a wide spectrum of Christians who were later seen as mutually hostile. The author considers the influence of the Awakening on radical attitudes to mission and ecclesiastical radicalism in Ireland, pre-Tractarian Oxford, and Scotland. In dealing with the reluctant movement towards secession from the established church, Stunt illuminates and reinterprets the origins of the early Catholic Apostolic Church and the Brethren. For a review of this book by the historian Dr Harold Rowdon, click here.